I am still working my way through the Me-262 project with might be the least unusual example of the five. Not that there is anything inherently boring about the Me-262B, it is just one of the variants that actually made it into production. Though I did resist the temptation to do one with the antennae array on the nose, I might come back to that one in the future.

But at least it provided some drama during construction. I discovered that the kit was missing the front windscreen. Missing clear bits seems to have been something of a theme around here recently – the Wellesley had the same issue. But I decided that since the panels on the piece were all flat, that I would actually construct a little frame in plastic strip and then fill in the openings with Kristal Kleer. Yeah, I don’t know what I was thinking, either. But it turns out that the theory was pretty sound, though if I had to do it over again I would place the frames a little differently. Still, I’ve had worse looking canopies.

The B model is of course the two-seater, used for training and for nightfighter ops. Technically the nightfighter is a 262B-1a/U1 while the trainer is a simple 262B-1a. The particular paint scheme is for 3/EJG2, though Hasegawa does not list a pilot name. RLM76 on the undersides, RLM81/82 on the top with a light mottle of RLM82 on the sides. All paints by Xtracolour. The decals were a combination of kit markings and some aftermarket crosses. Hasegawa decals tend to be a little thick, so replacing them with Aeromaster seemed like a good idea. 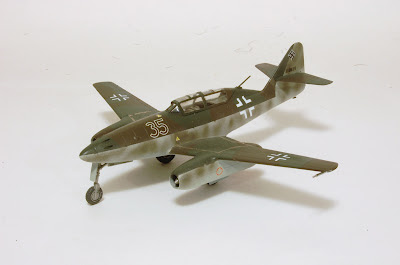 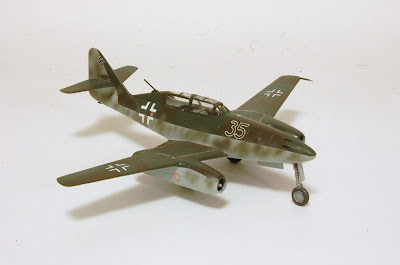