Next to last in this winter’s Me-262 project is not actually in the direct 262 lineage. But, like the He-280, it is definitely part of an exploration of late-war jet twin-engined fighter aircraft. Not something that made it into production, the Me-109TL was a paper project that attempted to merge the proven 109 airframe into the concept of podded jets on the wings. The intent was to find a way to shorten the production time of the Me-262 by using established components, including the 109’s straight (ie, not swept) wings. However, it turned out that enough changes were required to the standard 109 that no time was being saved by going this route, and the project was quietly dropped.

This is the Planet Models resin kit, and it provided all the advantages and problems that seem to come with that type of kit. Planet resins tend to be fairly well engineered, so fit was decent. However, the vac canopy and the use of superglue caused some issues. The canopy, due to its small size, got a bit foggy, and superglue always seems to do a much better job of sticking one’s fingers together than it does with the resin. But this all comes under the heading of Operator Error, so I want to stress that the kit itself is very good.

The paint scheme is a late-war standard, RLM76/75/81, all Xtracolour as usual. Decals were mostly from the spares box.

One of my goals is to produce as many unusual models as I can, and the Me-109TL certainly qualifies. It is not a shape that most people have on their shelves. Plus it looks good when placed with the 262 and the aforementioned He-280. And it certainly provides a well out of the mainstream shape in a lineup of 109s! 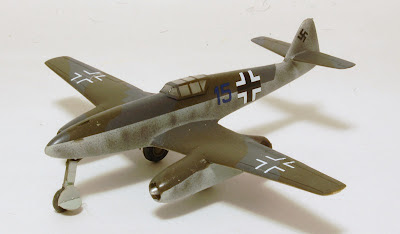 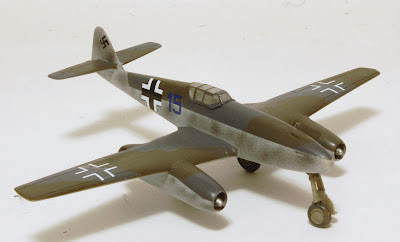 Posted by Kevin Callahan at 7:18 PM