Continuing through the Me-262 project, we now come to one of Revell’s short series of Luftwaffe 1946 types, the Messerschmitt P-1099. This used the wings, engines and tail of the 262, which no doubt held an appeal to Revell since they could use the same tooling. The fuselage was larger and rounder and the cockpit was relocated to the front of the aircraft. Revell had two boxings of the type: one a standard fighter and the other a heavy fighter with additional guns festooning the nose and sides.

Though I only had the heavy fighter boxing, I think the additions really do damage to the lines of the aircraft, which don’t have much of the 262’s purposeful aggression left, in any case. So mine is something of a hybrid, with all the extra guns deleted except the heavy cannons behind the cockpit. And that, only because you don’t have the option of the fighter canopy. The result is a bit mindful of the Schrage musik installations that were done in the late war period. That is one of the advantages of Luft46 modelling; since the type existed only as a design, you have more flexibility in both construction and markings.

Construction was for the most part trouble free. There are minor issues with the fit of the engines, as with all the types in the 262 project, but dry-fitting and adjustment will make your life easier. I even used the markings provided in the kit. Revell decals tend to be too matte, but treatment with setting solution and a good solid matte coat hid any problems. The periscope in the canopy managed to break off and lose itself inside the fuselage, but I replaced it with some plastic rod. 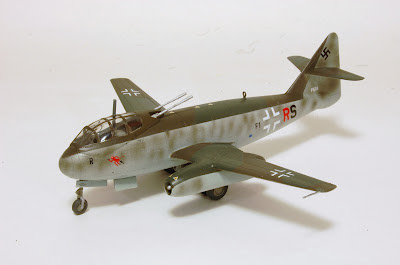 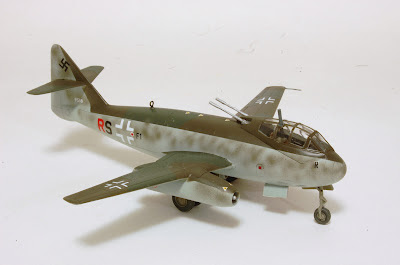 Posted by Kevin Callahan at 9:14 PM