Time to catch up on some recent construction here on the 72 Land production line.

Actually, most of the work was masking, but the one bit of extended construction came with the recent Avis kit of the EADS Barracuda, a German drone/UAV. I’m gathering together quite a little sub-collection of these unmanned aircraft, including the RQ-1, RQ-4, and RQ-9. I also have an unfinished Attack resin kit of the RQ-7. They have their attractions (no canopy masking)! I haven’t quite yet screwed up the courage to face the line of Unicraft drones; though they have a lot of them, engineering and molding does leave a lot to be desired. I think it is just a case of time being too precious to spend it rassling with a Unicraft resin.

Being a short-run kit, the Barracuda has had its building challenges. Detail is a little soft, fit is in some cases approximate, and I think they could have figured out a better way to mold the nose gear bay, which comes in five pieces. They really should have just used the same method that they molded the main gear bays, which is one piece each. The biggest trouble I’ve had so far is connecting the engine exhaust to the rear fuselage; I’ve gotten some rather sloppy putty started on the gap, but there is much sanding in my future I suspect.

Beyond this, most of what I’ve been doing seems to be masking. I had a small burst of activity in my long-term P-47 project (one completed bubbletop and three in-process razorbacks). One required wingtip/tail masking, two needed some complex cowl masking, and all three needed Eduard canopy masking sets applied. While the razorback canopy is fairly angular and thus open to freehand masking, I really do appreciate these Eduard sets. They just speed the process up wonderfully.

I also masked the lower surfaces of the Yugoslavian Hurricane in preparation of an upper surface coat of Middle Stone.

Beyond this, there was a bit of decal work needed on some airfield equipment. 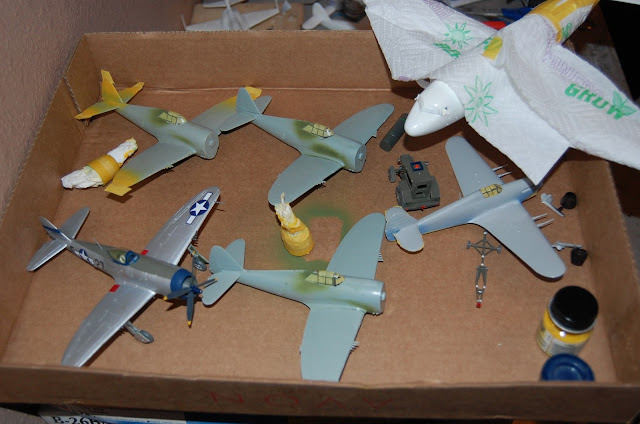 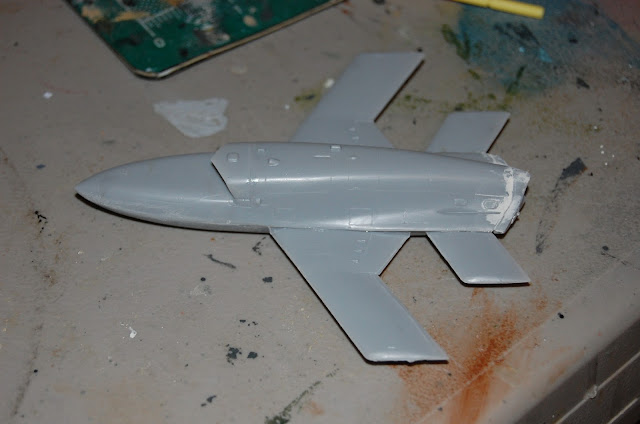 Posted by Kevin Callahan at 4:54 AM