I swear that late spring of 2017 is going to become known for associating harsh weather with airbrushing sessions. Today, the northwest had another series of fairly severe squalls going through, pelting us with heavy rain and the occasional hailstorm. Normally, the rain is light but steady, but this spring we’ve gotten a lot of the heavier stuff.

But, like the post office, “neither rain nor sleet” etc when it comes to airbrushing. I’ve got some serious momentum going, and do not want to fall back into last year’s indolent ways.

The first color through was Insignia Red. This went onto the wingtips and tail of a DC-3 (the future “Arctic Rose”) and the cowl flaps of a P-47. This particular cowl is a colorful piece all by itself, with Yellow, Olive Drab, White and Red all required.

Next came some Olive Drab, which found its way onto an antiglare strip for a P-47 and the upper surfaces of yet another P-47. On the few aircraft that I do multiples of, they tend to be built in clusters. In the near future another small group of Thunderbolts will find their way through, along with another short series of Hurricanes and even Me-163s.

I used an Eduard masking set for camo on the Yugoslavian Hurricane. Last time the Middle Stone coat went down, and this time featured the Dark Earth camo. This concludes the fuselage painting for this one. Next comes a Sky spinner and the Aluminum landing gear. In fact, I have about 6 different kits that require landing gear painting, so next session will heavily feature Alclad paint.

Finally, the EADS Barracuda drone needed its wheel bays and doors painted in a Dark Grey. I just used a generic USAF grey for this one. I’m so used to modern aircraft having white gear and bays that it is a good thing I checked the instruction sheet on this one. I also needed to check some seam work so I used the grey as a faux primer. A bit more work to be done but not as serious as I had expected. 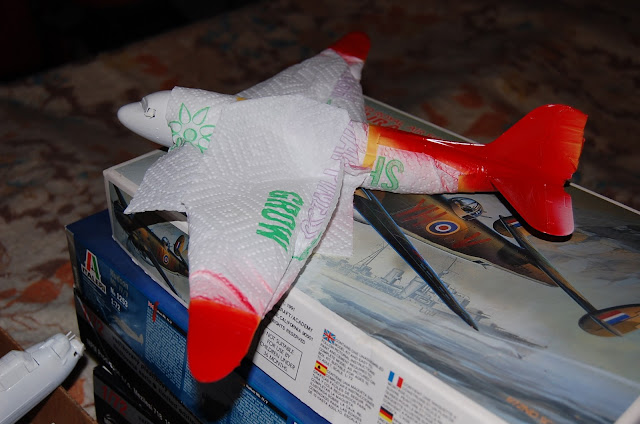 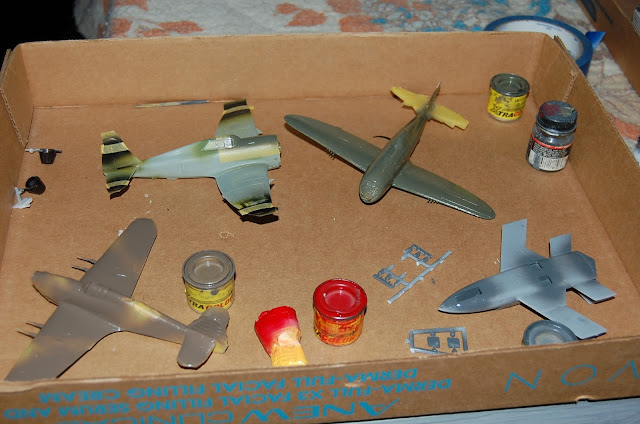 Posted by Kevin Callahan at 6:46 AM