Today’s painting session consisted mostly of mundane tasks, though I did get a final NMF / White Aluminum coat onto one of the P-47s that are in progress.

While the Alclad was loaded into the brush, I took the opportunity to get all of the P-47s’ landing gear, wheel hubs, tail wheels, and one prop hub painted. Also, since the Barracuda has metallic landing gear, they were taken care of also.

I belatedly discovered that two of the P-47s I was working on had White wing leading edges. I should have known this, since they both also have White tails, but the decal sheet drawings I was working from only showed it on the upper view. Not a huge deal; I just masked the leading edge off, covered the rest of the model with paper towels, and shot some ModelMaster Gloss White. It would have been more convenient if I had done this while painting the tails, but at least it wasn’t a catastrophic failure. At least, not what passes for a major failure in MY paint booth…

I also got a coat of Sky onto a Hurricane’s prop spinner, and repaired that same Hurricane’s landing gear doors. The Azure Blue didn’t cover terribly well and needed reinforcement.

Finally, I used a rattle can of Panzer Grey to get a first coat onto props for the P-47s, Hurricane, and DC-3. Next will come masking the prop tips and giving them a shot of Insignia Yellow. 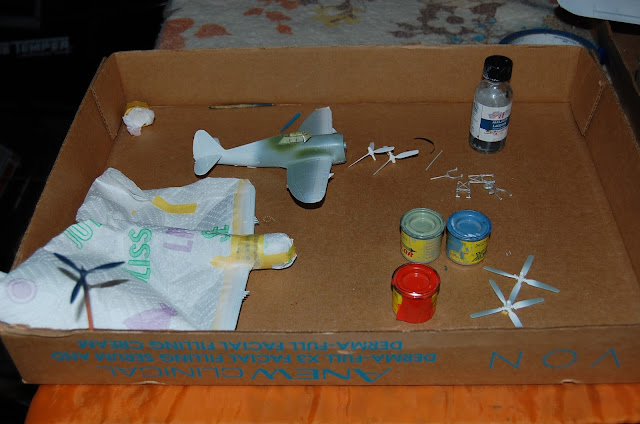 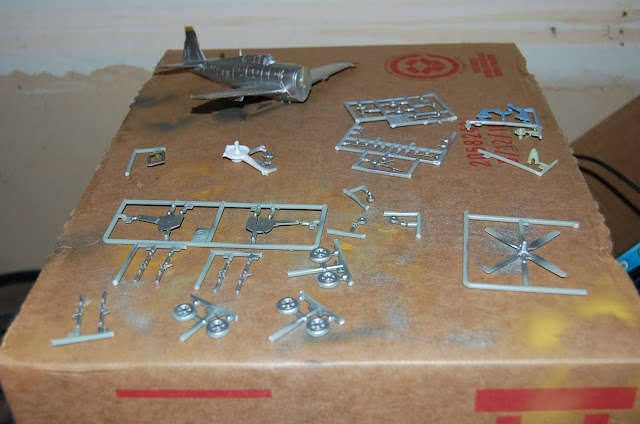 Posted by Kevin Callahan at 6:18 AM