Bench time today was centered around adding various details to get three aircraft ready for decals.

First off were two P-47 razorbacks. These both had a long painting cycle, with their white tails and wing leading edges and variously colored cowlings. I added the landing gear, wheels, gear doors, and various externals like pitot and antenna mast. Props as well. They are now ready to receive decals for “Passionate Patsy” and “Pride of Lodi” respectively.

Then came the Avis EADS Barracuda. I added their rather complex landing gear (which when combined with their short-run nature, made for something of a challenge, especially the gear doors). Final touches were a couple of antennae and a (FLIR?) ball on the underside. Decals are next for this one too.

Finally, I added wheels and decals to another ammunition trailer, this one coming from a Hasegawa set. It will need a minor bit of detail painting and a coat of matte sealer and this one will be done.

Production is good at the 72 Land industrial heartland, though the weather here in the Great Northwest is going to be hitting the upper 80s the next few days, which usually means the head production czar is going to be spending most of his time sitting in front of a fan with a glass of lemonade. 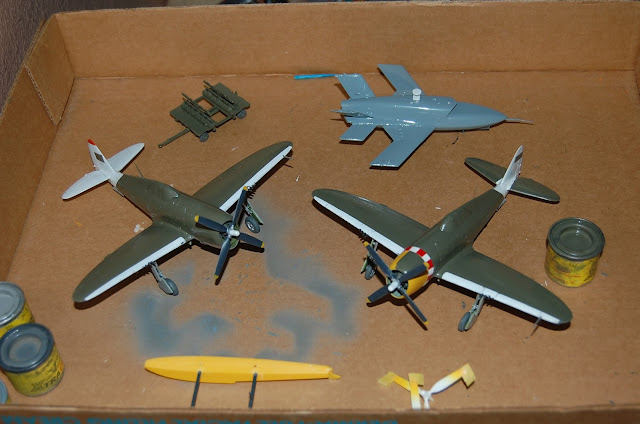 Posted by Kevin Callahan at 3:35 PM