I mentioned earlier that I was doing some complex decal work on two BAe Hawks. Looks like one of those is now ready for its debut. I first saw the 2011 solo display Hawk for 4 Flying Training School in an issue of Air Forces Monthly. I’m a sucker for special schemes and while not as flamboyant as some display aircraft, it looked like it would be an easy one to apply.

Sooner or later, I figured, someone would do the decals. And, sure enough, Xtradecal included it on their 72137: Hawks and Tucano sheet.

I’ve gone through enough of the new Airfix Hawks that I have the process down well. I do still have some issues with the landing gear (they don’t seem to seat into their placement holes very well) and of course painting is always fraught with danger… until it is completed. The problem that popped up late in the game this time was the tan line on the canopy for the internal glass partition. The new rule #6 (there is NO.....rule #6) is that I am not allowed to brush paint anything that is masked with yellow Tamiya tape. It’s just too easy for thickly applied paint to cause seepage underneath.  Brushpainting cockpit details is still allowed, but not on the exterior. Ah, there is always something.

These decals were indeed complex to apply. But I struggled against my natural inclination to hurry through the procedure. Apply some decals, follow with strong setting solution, and let the model dry for a few hours. I managed to mostly avoid pitfalls, though there is one leading edge stripe repair that is necessary and of course the pitot tried to escape.

Coming up shortly will be another display Hawk, this one from 2009. 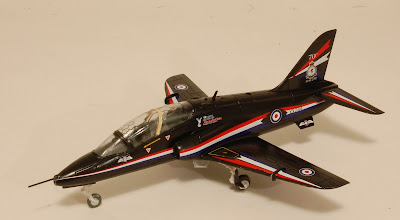 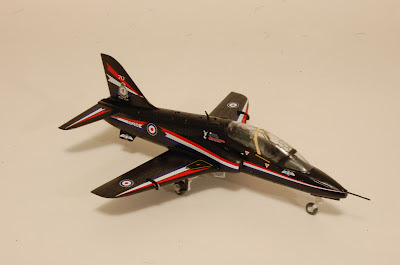 Posted by Kevin Callahan at 5:32 PM