I tend to produce three kinds of blog entries (four if you count the occasional Northwest travel postings): construction, painting, and completed projects. Today falls into the painting category.

I’ve been gunning right along with the Me-262 project, now that I’ve gotten my modelling mojo back. Within the last couple of days I have put the RLM81 coat on the upper surfaces of the P-1099 and Me-262B. Then I masked the camo and put on the RLM82 coat. This evening I stripped off all the masking. A couple of aggravating places where the Tamiya tape actually pulled up some of the paint. Perhaps I haven’t been as attentive to cleaning off the plastic prior to overall painting. It seems to have happened mostly on the RLM76 paint, so I suppose it might be an issue with the tin I just opened. Unfortunately I have two other models that have received RLM76 paint and will be getting their masking shortly, so it may not be the end of this particular problem. Next step on those two are the freehand RLM81 mottling, always a tense bit of work since the margin of error is high.

The F-18 is up on its wheels too. This will be a New Orleans / LA ANG bird, which was featured on the Katrina special decal sheet that TwoBobs produced a few years back. I suppose I’ll have to build one of the more modern F-18Es now, if only to visually compare the two. You can see the partially complete Airfix Swordfish in the background of that shot as well. 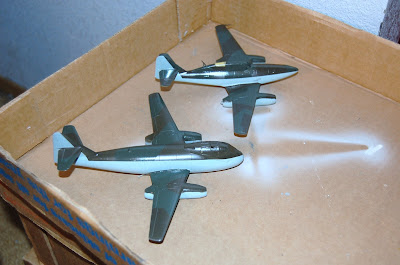 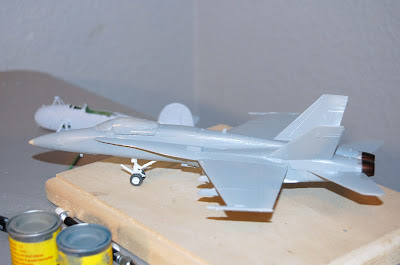 Posted by Kevin Callahan at 8:10 PM