Next in the parade of finished items for April of 2012 is the Vickers Wellesley. This one has an interesting history. I even remember when and where I actually bought the thing. It was during one of our trips back to the old country (Southern California) after we had moved to Seattle. Probably 86 or 87. When in town I do the hobby shop tour, though almost everything other than Brookhurst Hobbies has gone to the great retail mall in the sky since then. There was a little hobby store in Orange that I occasionally visited, which was good for odd kits and back issues of Air Enthusiast. The Wellesley was not at all common to see at a retail store even then, and it was cheap so I snapped it up.

And it sat in the stash for a couple of decades. Last winter, I was looking for a mojo restorer, and Matchbox kits tend to be relatively easy builds, even if the detail is sometimes deficient and the panel lines trenchlike. I settled on the Wellesley, if only because it was an RAF type I had never built. I discovered, however, that the rear canopy had gone missing during the years in storage. The Wellesley has not been reissued by Revell Germany, so there was probably no way to replace that without buying an entire new kit.

As I was visiting the What If forum (here - which I heartily recommend) I found that Kit Spackman had done a speculative version of the Wellesley. What interested me was that his version had a single cockpit – and no rear canopy. Either he had a spare or had lost one like I did (maybe carpet monsters internationally have a taste for Wellesley rear canopies). One PM later and Kit was generously posting me the canopy at no cost. A good man, that.

I didn’t build anything new into the cockpit, since I planned to have both canopies closed. The kit still fit well, though I was a bit handicapped by the fact that the kit didn’t come with instructions or decals. Still, there aren’t that many parts, and I managed to figure out where they all went.

The only real disaster involved with this one is when I dropped the thing after it was all together. The landing gear didn’t survive the trip. I managed to piece them back together with plastic rod and inappropriate language.

Since I had no decals, I had to supply them via spares. I did have the 8” black letters and numbers for the serials on tail and fuselage, but I discovered that I did not have the right size for either the grey codes on the fuselage sides or the white serials under the wings.These are without roundels, which is out of the ordinary (though supported by photos I found on Google). Hannants does appear to have both in stock, so technically this will not be finished until that order eventually takes its sea voyage.

Still, I’m fairly happy with a model of a type that has never been done by anyone else and that did recover from some significant damage in the building process. 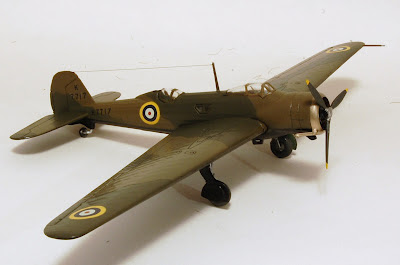 Posted by Kevin Callahan at 6:29 PM