The second finished model to cross the finish line in this latest burst of completions is yet another paper project. I have a real weakness for both WW2 1946 and postwar research airframes. This was a development of the Me-262 (and is a part of my 262 development project). The engines were moved from wing pods to the fuselage, and the wings were swept back. The cockpit was also enlarged to carry three crew. Apparently the Messerschmitt design group didn’t have enough confidence in the changes, because the entire project was cancelled in early 1945.

The Special Hobby kit was one of their earliest efforts, and it shows. The detail isn’t terribly sharp, the fit is not great (though manageable) and the canopy is vacuformed. Still, with some prudent dry-fitting I didn’t need much filler on the joints. The main disaster on this one was in attempting to attach the canopy. Being vacuform, it had to be attached with superglue, one of the banes of my existence. After holding the canopy and fuselage for a few moments to allow the glue to cure, I noticed that the canopy had moved a bit off center. No chance to move it, however, since by then the glue was set. It isn’t very noticeable unless you’re looking at it from the right angle. The canopy material itself was a little cloudy, but I did go to the trouble of putting photo-etched seat belts on the two seats that required them. It appears the third guy was considered expendable, since he didn’t have one. 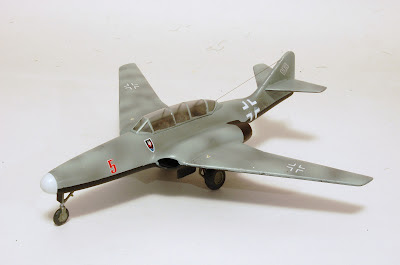 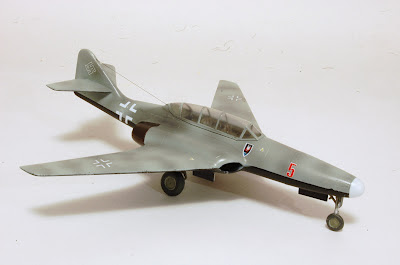 Posted by Kevin Callahan at 6:53 PM