Time for the other shoe (or in this case Hawk) to drop. I managed to get a couple of these new Airfix Hawk T1s in their Red Arrows boxing cheap from Sprue Bros. Thankfully Airfix did not follow Italeri’s example and mold them in red plastic, which may be helpful to the kiddies, but makes painting them a serious chore. But these are in standard prison grey.

Having one overall exterior color is well within my wheelhouse as well, though I am feeling the need to produce some Hawks in earlier greys or even green/grey camo. Raspberry ripple will take some additional mulling, however. My next Hawk is liable to be a T2 (I have that Airfix kit too) when Xtradecal produces their History of 4th Squadron sheet, which promises to feature that T2 in full squadron markings. Alas, with the budget cuts that the RAF has been going through, it is liable to be the only T2 squadron for the near future, at least until the T1s start being retired at the end of the decade. Not really a problem, since I think the Hawk’s lines are much cleaner and more attractive on the T1 anyway. That T2 nose is the visual equivalent of a clown shoe.

Construction went pretty well, given that I've built a number of these new-tool Hawks now. I did manage one rather head-shaking public gaffe - getting the gear legs reversed and then posting the finished product on Britmodeller. I rectified the error and took the new pictures below.

The decal designer split the motif that goes from tail to forward fuselage into two pieces per side. Although this requires some lining up, I do prefer this method. If you trim extremely close to the decal at the base of the fin, the two decals can touch more efficiently than if it was one piece that you must try to press down into a 90 degree angle. Very often even setting solution won’t save you (experience speaking here).

This was the 2009 solo display Hawk from 208 Squadron at RAF Valley. The markings were designed to commemorate the 90th anniversary of the RAF Benevolent Fund. It really is an attractive scheme, and I’m sure it was nice to see for those of you lucky enough to have caught it on the airshow circuit. 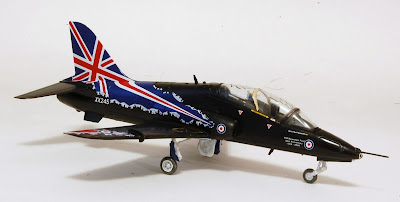 Posted by Kevin Callahan at 7:05 PM