My display space crisis has taken a turn for the worse. The company I had ordered the maple 6 foot storage case from suddenly decided that they were going to discontinue the item (I knew it was going to take them a few months to order it in from their supplier, but deciding not to order any in at all was a surprise). So I had a choice. I could have one shipped in from Denver or accept a Black one instead of maple.

Black just doesn’t match with anything else in the room. The original 3 display cases have wooden sides and glass fronts/tops and of course all of the bookcases are wood, mostly oak. Besides being naturally dark, black just wouldn’t work visually. And shipping from Denver for a maple version ended up being a full 50% of the MSRP for the case itself. That didn’t work either.

I do have a line on some additional display when a Seattle friend relocates to New Zealand in late 2019 or early 2020. So I am possibly backing into the idea of a couple of countertop displays to take the pressure off temporarily. I’ve been very happy with a smaller case I got a few years back (roughly 28x30x12) and would be delighted if I could get another couple of those. But I have no clue of the manufacturer or of a current source (I bought it second hand, and who knows where the original came from). I’ve checked all the usual suspects – Ikea, et al – but no luck. So the countertop plan might be the best. The cases are smaller, but they are cheaper as well.

It is likely that the countertop cases will take the fighter aircraft, while anything larger will go into the larger cases. I do know I have a great deal of work to do on this project, and just want to get moving on it!

I still plan to re-shelve the existing 3 display cases as I move them into the basement from their current location in the garage. That alone should increase my storage capacity by 40%. But that is a long and somewhat costly process as well, since it involves custom-sized glass shelves.

This is the case I got a few years back. As you can see, I put it to good use! 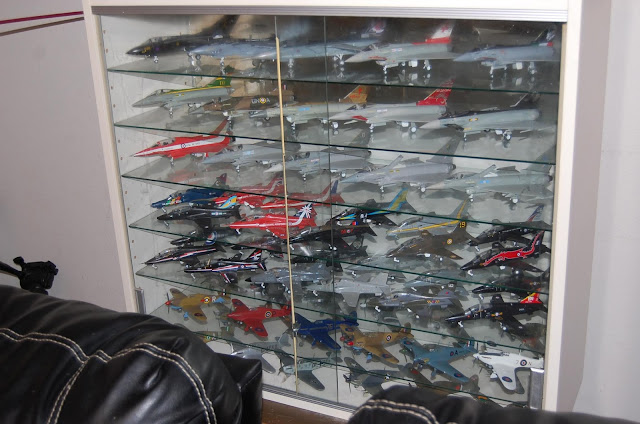